When it comes to swing sets, there’s toddler options, wooden swing sets and metal swing sets. We’ve talked about building wooden play structures and buying metal swing sets before but we keep getting the same question. “Where can we find heavy duty swing sets?”

In our opinion, the most heavy duty swing sets are made with a metal support structure. They’re generally lower maintenance. And, you won’t be performing splinter removals. There are quite a few manufacturers selling metal play structures. And, there’s tons of choices. But, when it comes to the most durable and heavy duty swing sets, our resident expert believes some of the best are being made by Lifetime Products.

Lifetime Products is a Utah-based company, founded in 1986. It’s roots go back to 1972, when one dad simply wanted a better basketball hoop and built his own with some used pipe, a piece of plywood and a basketball rim. Through the years they’ve earned numerous design awards and patents. They’ve grown from a small company with 15 employees in one location to an international company of over 2,800.

They are one of the world’s leading manufacturers of blow-molded polyethylene and have the largest single-point blow molded plastics facility in North America. Their metals division produces processed steel items for their own products as well as a number of other regional manufacturers. The Utah Manufacturers Association named them the Utah Manufacturer of the Year in 2015 and 2016.

You might already have one of their products in your home. Their folding tables and chairs, recognized as some of the best in the industry, are available at many big box retailers.

According to their website, Lifetime Products offers a 5-year limited warranty. You’ll have only 10 days after delivery to make damage during shipping claims. However, according to comments made by families, replacement parts were generally shipped quickly and with few problems.

Their playground equipment is built to last with all-weather, high strength, low alloy steel. At least two families reported trees fell on their Monkey Bar Adventure sets and the only damage was some chipped paint and a cracked slide which Lifetime replaced.

All of the hard edges are rounded or covered with plastic caps. Little fingers won’t get caught or pinched in the chains – they have a tube of soft rubber covering the lower part of the swing chains. Lifetime also boasts that their swing sets contain no lead-based material.

The support structure is made with 3″ steel poles with a weather and rust-resistant powder coating.

Full instruction manuals are available on their website and their support phone numbers and emails are prominently displayed. Manuals are written in English, French and Spanish. We did notice between the manuals, their website and answers to customer questions listed slightly different weight tolerances for the swings and the play structures as a whole. The differences we found were between 5 and 15 pounds.

The manuals also have nicely detailed diagrams for helping families decide where to place the swing sets and play structures. These diagrams include additional space needed for swing zones, fall zones and slide exits. For additional advice on selecting a location for installation, check out our own guide to swing set placement.

Of the 8 different swing sets and play structures made by Lifetime Products, this is one of two of their heavy duty swing sets without a slide. It comes in both earth tones (tan and green) and primary (red, yellow and blue) color schemes.

This set comes with a pair of belt swings and a trapeze bar that also has gym rings.

There were a few complaints about this product. The swings might be a little high for younger children – one family added extra chain and another simply buried the legs to lower the overall height of their swing set. Assembly times varied but a few folks did complain of somewhat unclear instructions and unlabeled pieces. However, ratings were high (some of the highest we’ve seen for any cool toy) and very few were unfavorable.

Even though a number of families felt there wasn’t a need to use ground anchors, Cool Outdoor Toys recommends you consider adding them to ensure swingers’ safety.

This heavy duty swing set by Lifetime also comes in earth tones or primary color schemes. This model is slightly larger than the A-Frame model. However, it requires slightly less space due to the configuration of the play stations and swings.

The Monkey Bar Adventure Heavy Duty Swing Set comes with a 9 foot wavy slide, 3 belt swings, 1 trapeze bar with gym rings, monkey bars and a fireman’s pole. A number of parents admitted to swinging from the monkey bars. But, the height can intimidate some smaller children. However, most agreed that just extends the usefulness of this swing set.

There are so many adventures to be had on this heavy duty swing set and play structure. There’s a 9 foot long wavy slide. Kids can climb up to the roofed clubhouse on their 3-D climbing wall (can be climbed from either side), the cargo net or a ladder. Kids can set sail on adventures with the ships wheel that clicks as it turns and be on the lookout for invading pirates with the binoculars. The activity chalkboard is a great place for leaving secret notes. A propeller swing is tucked underneath the clubhouse. The set also comes with two belt swings and a trapeze bar with gym rings.

This set is big. The pieces are big. It comes shipped in an open-sided wooden box/frame. The box is around 17 feet long – about the size of a single car garage bay.

The binoculars are a cool feature but apparently do not have any magnification. But, that might be a good thing. At the increased height of the play deck, it might create embarrassing encounters with the neighbors if it did have magnification.

All of the plastic portions of the structure are designed to withstand years of sun and inclement weather. That design, however, is for the assembled structure. We would suggest limiting their exposure to the sun during assembly. One family noticed the sun was beginning to warp the chalkboard and were luckily able to put it under cover before it was too misshapen to install.

We would also suggest that any family who purchases this set to check out the online reviews. Many families shared clever ideas for placement on slightly sloped yards, assembly and tools.

Assembling these heavy duty swing sets is going to be hard work. The pieces are heavy and there are a lot of nuts and bolts holding everything together. Over and over again, families recommended that you should take your time, go slowly and follow the directions in order.

Like any put-it-together yourself item, the assembly time varies. The A-frame and monkey bar sets appear to take between 3 and 8 hours to assemble. Allow up to 2 full days for the Adventure set. Families have said that all three of these heavy duty swing sets can be assembled by one person. Cool Outdoor Toys would like to suggest that if your family has only one person available to assemble your set, you might want to consider hiring outside help. After all, hurting yourself and maybe needing a trip to the emergency room costs a lot more than hiring a professional or bribing/exchanging favors with a neighbor.

Be prepared to make a run to the home improvement store. Of the hundreds of reviews we read, no one mentioned having extra parts and quite a few reported missing hardware. Some had replacements shipped from Lifetime; others simply purchased new ones. Despite missing parts or having to drill their own holes, families still gave 4 and 5 star reviews and love the product.

We found only one reviewer who made the excellent suggestion of using a level when preparing the space and building their heavy duty swing set. We love that suggestion.

Check the manuals on the website before you begin assembly. For one family, the instructions that came with their heavy duty swing set were for an older model as opposed to the one they received. However, it sounded like they ended up using information from both of them to assemble their play structure. 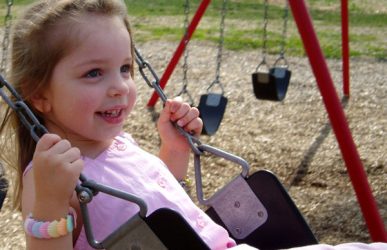 Oh, the many hours I spent soaring in the clouds on my old metal swing… 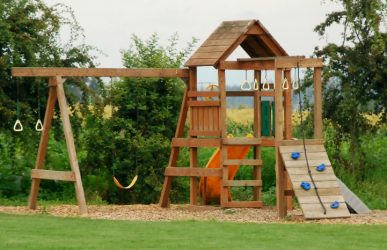 Thinking of building a wooden swing set? They sure do look cool and offer a…