The Strider name has become somewhat synonymous with balance bikes. They are the leading brand of balance bikes in the world and they’re sold in 75 countries across 6 continents. Their bikes aren’t cheap. If they’re out of reach for your family, you might want to check out the Radio Flyer Balance Bike, our favorite budget-friendly balance bike for toddlers.

The Strider company philosophy is that everyone should be able to ride. And, as one of the few companies manufacturing adult-sized balance bikes, they’re making that a reality for many who would otherwise be unable to ride a bike.

It all began as many toy companies do; with a parent and their child.

The Founding of Strider Bikes

Ryan McFarland’s grandfather was a race car engineer and his father owned a motorcycle dealership. Ryan loves riding dirt bikes and mountain bikes and has raced go-karts and stock cars.

When his son turned two, McFarland purchased a little bike for him. Unfortunately, the 12″ pedal bike he purchased was too heavy, too big and too complex for his son to master. Disappointed, but, undeterred, he cut that bike apart. The goal? Remove every bit that wasn’t required and make the bike lighter so his small son could handle it.

McFarland began by removing everything that wasn’t essential to riding. But, it wasn’t the frame that had been adding the most weight, it was the drive train – the pedals, cranks, bearing, chain and sprockets. Everything changed when he realized his son didn’t need all that stuff for the bike to be ridable. With the drive train removed, he could also cut the frame down further and lower the center of gravity of the bike too.

McFarland gave the heavily modified bike to his son. His little boy quickly took to it and was instinctively gliding around the room. He could easily put both feet on the ground. He wasn’t scared and he didn’t fall. And, all on his own he began lifting his feet and coasting.

A few years later, in 2007, McFarland founded Strider Bikes building upon what he learned from the semi-deconstructed bike he made for his son. The company continues to grow and has sold over 1 million bikes.

Strider Balance Bikes are available for all ages and abilities – they are one of the few companies making a full range of 12, 14, 16 and 20 inch pedal-less bikes. Everyone from infants to adults weighing up to 242.5 pounds can ride one of their bikes. And, all of their bikes come with adjustable height seats and handlebars.

The 12″ and 14″ Strider Bikes have tires made from an EVA polymer. EVA tires weigh about half as much as air-filled tires and will never go flat. However, there is a bit of a tradeoff there. While the solid tires are indeed lighter, they are not as ‘grippy’ on uneven surfaces. If your family rides on trails or other non-paved surfaces, you might want to save the more uneven trails until your younger riders have graduated to a pedal-driven bike with pneumatic tires.

All of the 12″ Strider Bikes have adjustable seats and handlebars (18-22 inches). However, the 12″ Classic does not come with a padded seat and only has a 6″ seatpost. We recommend upgrading to the 9″ seatpost and padded seat for added comfort and extra height.

* The Strider Bike warranty specifies that permitting riders over 60 pounds on their 12 inch models will void the warranty.

Turn any of Strider’s 12 inch bikes into a rocking horse with the Strider Rocking Base. It measures 10 x 15 x 5.8 inches and weighs 5 pounds. With a bike clamped to the rocker, toddlers can rock back and forth while sitting safely on their bike. It helps them build their inner core strength and balance while getting used to sitting on a bike seat.

When the child is ready, simply remove the rocker base and the child can glide around on their Strider Bike.

The rocker base will keep the bike perfectly straight and the seat perpendicular to the ground. No worries of improperly installed training wheels that train the rider to an incorrect center of gravity. We’ve seen children lose all joy for bike riding after mis-aligned training wheels taught them to lean off of center.

The Strider Rocker Base is sold alone. It is also sold as a bundle with the 12″ Sport model or the 12″ Pro model.

A number of families have reported that the Strider Rocker Base has worked with some 12″ balance bikes from other manufacturers.

The 14″ Strider Sport Balance bike might just be the perfect balance bike to transition your child from striding to pedaling. There’s only a “Sport” Model at this size but unless you feel your child can only ride a bike with an aluminum frame, you should be fine.

What really makes this bike a standout is that it truly can grow with your child. You can take the bike they already love and convert it from a balance bike to a pedal-driven one. The Strider Pedal Kit can be attached with a single bolt; they even provide the wrench you’ll need to secure it.

But, that pedal kit does appear to impact your color choices. We checked and double checked on the way Strider sells their 14″ balance bikes. Unfortunately, when it comes to the color choices for the 14″ Sport model, it can get a little tricky.

If you want to buy just a 14″ Strider Bike (without the pedal kit), your only choice is the Fuchsia. If you want an Awesome Blue or Fantastic Green model, you have to buy the Strider 14x Sport Bundle that comes with the pedal kit. But, if you want a 14″ pink Strider bike and pedal kit, you have to buy them separately and it will generally cost you $10-20 more than the Awesome Blue or Fantastic Green “bundle” price. At least, that was how they were being sold when we wrote this article.

* weight without pedals, pedal kit adds 2.6 pounds to the weight of the bike

Strider believes that everyone should have a chance to ride a bike. Their 16 inch and 20 inch bikes help make that possible for people with cognitive, developmental or physical disabilities. They’re also great for older children or adults who are new to the joys of bike riding.

To further assist riders, these models come with pneumatic, air-filled tires to ensure maximum surface grip. They also have hand brakes. The front brake is installed on the right side of the handlebar and the rear on the left but, they can be switched to accommodate each rider’s needs.

The 16 inch model comes with a kickstand (the only Strider model that does).

While it would seem like a great idea, Strider does not offer a pedal kit for their two largest bikes.

Strider Bikes has a very cool option for parents and children to play in the snow. Their Snow Ski Set turns a balance bike into a bike sled. With velcro straps and the durable plastic skis, you can turn any of the 12″ Strider Bikes into the perfect winter toy.

The only flaw we’ve seen with the ski set is that they are only available for the 12″ models.

When you’ve got a family-owned company with racing in it’s blood, is it any surprise that they would hold events that have become known as the “Tour de France for Toddlers”?

Races are held all over the world. Events have been held in Russia, China, Finland, the Philippines, Ecuador, England, the United States and elsewhere. The world championships are held each year in the United States. In 2018, they were held in Boulder, Co. In 2019, young riders and their families met in Charlotte, NC.

There’s even a Strider Snow Cup. 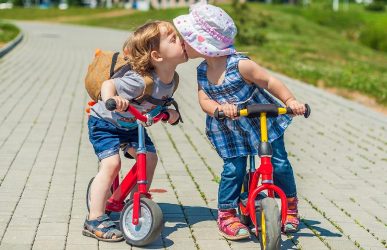 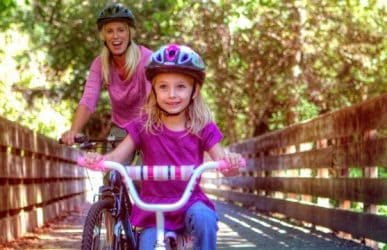 Does your little girl love the Disney princesses? Would she like riding a bike that's…