Does your little girl love the Disney princesses? Cinderella, Snow White, Elsa and the rest? Would she like riding a bike that’s all about being a princess? The folks at Huffy and Disney got ‘ya covered. They have an entire line of Disney Princess bikes for young children with all of the features any budding royal would want.

What makes a bike a princess bike? Apparently, there’s two things that bikes being marketed under that description have in common – bold graphics on colorful frames and lots of great girl-powered accessories. Most of these princess bikes come equipped with a set of removable training wheels and handlebar streamers. Other popular accessories include baby carriers, handlebar baskets, bells, purses and backpacks. One model even comes with an enchanted doll carriage that sits on the handlebars.

Before choosing a princess bike, measure your child’s inseam. The inseam is the measurement from the ground up to the crotch. Don’t forget to measure them while wearing the shoes your child typically plays in. Add an inch to the measurement and then look for the model which is the closest match.

Huffy has teamed up with Disney and offers a variety of princess-themed bikes designed for children 3 to 6 years old. They offer three different sizes – 12, 14 and 16 inches tall. We’ll be discussing several of the 12-inch models. The documentation from Huffy did not provide guidance on weight limitations for their 12-inch bikes. One third-party seller suggested children should weigh less than 50 pounds.

The training wheels are removable. The wheels themselves are hard plastic with a metal support structure.

All of the models we discuss, including the 16″ model do not have kickstands.

The bike chains are well covered to prevent clothing from getting tangled in the links. These princess bikes all have coaster brakes (the ones where you push the pedals backward to brake). Tires are rubber tube tires that require air.

According to the general bike owner’s manual, we found on the Huffy website, the steel bike frames are warranted for life. (The princess bikes appear to all have steel frames.) The fork on the princess bikes are also warranted for life. All other components are warranted for six (6) months from the date of purchase. Huffy will pay to replace components found to be defective by Huffy however, the original owner must pay all labor and transportation charges connected with the repair or warranty work.

The Huffy Princess bikes do not offer the EZ Assembly feature and will require assembly. We suggest you schedule at least an hour, two to be safe, for assembly. According to the user’s manual, you will likely need a small adjustable wrench that opens to at least 9/16 inch, open-end wrenches, flat-blade screwdriver, Phillips screwdriver, slip-joint pliers and metric allen wrenches. However, parents report needing only a screw driver and a pair of pliers.

We love this model. It’s pink! Even the training wheels are pink. The official product descriptions don’t say who will join your child on this princess bike, but we’ve spotted Cinderella, Belle, Snow White, Arial, Tiana and Princess Jasmin on the model we looked at. Rapunzel, Merda, Fa Mulan and Pocahontas may be there as well, we just didn’t spot them in the product photos.

The most charming and fun accessory that comes with this model is the behind the seat royal doll carrier. Treasured dolls and teddies can ride in the carrier in much the same way infants and toddlers do in similar seats on adult bikes. The molded plastic seat is princess pink with passenger safety features of rail-like decorations and a seat-belt with a velcro closure.

Your little one will love the shimmering tassels which hang from handlebars trimmed in hearts. The numerous princess stickers also feature glittery and shimmery accents. The most important bling on this Disney princess bikes are the reflectors on the heart-shaped pedals.

Your little princess can warn everyone to make way for her royal personage with the included bell. It has a clever rotating design that is perfect for smaller hands.

We particularly like this model because of the padding on the front handlebars.

This model only comes in the 12-inch size.

The Disney Princesses will accompany your little one everywhere she goes on this sweet little pink and purple bike. Again, we’re not sure if all of the Disney Princesses puts in an appearance but we’ve spotted at least five of them on the frame and padded seat. The cute doll carriage is also decorated with several smiling princesses.

The handlebar tassels are a shimmery pearl and the training wheels are decorated with shimmering pink hearts. The pedals are a more traditional shape but do have the edge reflectors. Unfortunately, they appear to be the only reflectors on this model and we would strong urge families to add more reflective elements to this model.

The carriage makes it possible for your little one to bring her favorite doll or teddy everywhere she goes; as long as they weigh less than 2.5 pounds. The carriage is removable for play or installation on another bike. It comes unassembled.

We have mixed feelings about this particular princess bike. The doll carriage perches on the handlebars, leaving no room for padding. The kids absolutely love it and we haven’t found anyone complaining it has led to injuries but, we suspect the carriages, when full of toys, could negatively impact the balance of the bike.

Does your little one love Anna, Elsa and Olaf? Then this charming princess bike might be the perfect fit. Huffy offers this model in 12-inch and 16-inch sizes.

Snowflakes and icicles adorn this Disney Princess bike. Kids will love riding around with their Frozen favorites. They can carry their favorite treasures in the backpack too.

We like this one because it has both handlebar padding and a soft neoprene backpack for carrying treasures. It features a frosty teal blue diamond frame with purple and blue accents. The training wheels and foot pedals are purple. Traditional styling on the pedals with reflectors along the edge.

Shimmery streamers in pearl and teal dangle from each of the handlebars.

A Bit Disappointed in Huffy

Huffy has been making bicycles for over 120 years. You would think they would be experts in knowing what people want to know when purchasing their products. Their product descriptions did not answer all of our questions. We’ve found more detailed information on third-party sellers than the Huffy site. We’ve also seen what appears to be some differences in styling and safety features

The iridescent stickers do have some reflective properties. However, the product descriptions and photos do not mention if there are front and rear reflectors. We have checked out a number of videos from happy families who own these bikes. Those videos all have shown a red rear reflector and a white front reflector. However, other families are reporting that they did not receive reflectors.

In researching these bicycles, we noticed that there are slight variations in the frame colors, pedal colors and graphics from those shown in the Huffy product photos. For example, the Frozen Princess bike is shown with a frosty teal blue frame and purple trim. One Youtube video clearly shows a white axel, pink trim, pink pedals and slightly different graphics. The chain cover is also plastic instead of metal.

The differently colored frames and pedals might merely reflect slight changes in product design from one year to the next, a case of offering slightly different products to different retailers to meet pricing requirements or some other issue. The Huffy safety sticker and other Huffy branding were visible on the bikes with different colors. We don’t really see this as a deal breaker but do think it is something worth mentioning.

Many of these toddler and pre-teen sized bikes come with warnings about not being street-worthy. Families report they work great both inside and out. We suspect those warnings are not truly about the bike’s ability to handle blacktop or concrete but are about children this size riding in roadways. Families should always watch over children this small and provide safe places to play that limits their exposure to street traffic.

We were surprised that Huffy did not make it clear if their bikes came equipped with reflectors. And, some of the accessories clearly block the front reflectors.

We all know children may occasionally defy house rules and make a quick dash across the street or down the sidewalk crossing driveway entrances. If you don’t want to invest in bike safety lights, we would suggest purchasing some . The kids will love the added bling and drivers will be more able to see your kids in low-light conditions. And, with the tape you have left, you could add some to bike helmets, strollers, your own bikes or even Halloween costumes.

We have noticed a number of families reporting key components of the bikes were not in the boxes. We saw this happening with all of the children’s bikes, not just those made by Huffy.

Rather than simply sending replacement parts, the manufacturers are often asking families to return the entire bike.

Oddly enough, many of the families had already assembled the bikes even when such obviously required pieces like the seat or one of the pedals was missing. Save yourself the headache of assembling and dis-assembling an incomplete bike by always checking all of the parts arrived and are in working order.

All in all, the reviews on these Disney princess bikes were positive. Most of the complaints folks had were the same complaints being made with virtually every kids bike on the market.

Kids absolutely love riding with their favorite Disney Princesses. These bikes are super cute and families often end up buying more than one.

Were we shopping for a riding toy for a 3-6-year-old girl, we would definitely include these Disney princess bikes on our short list. Reflectors can be easily added and the color differences won’t matter once your little one sees their Disney favorites.

Learn about Strider Balance Bikes. With models ranging from 12 to 20 inches, they are… 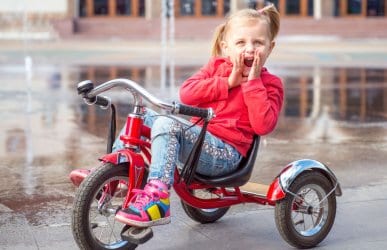 Let’s take it back to the days when we were kids; when the worries of…