Whether the day brings gusty winds or a light breeze, you might be surprised to find that there is a kite for every condition. Kites are fun and a safe activity for the entire family. The big thing to remember is to not forget the string. Make sure if the kite you purchase does not come with kite string to buy some separately.

Single line kites are flown with a single string and are perhaps the most traditional form of kites. Where we once used to have paper and wooden dowels that rarely survived a crash, there are now space-age materials designed to be both light weight and durable.

Delta kites, one of the most popular single line styles for beginner’s, are the triangular shaped ones – they were actually invented by NASA. Delta kites are among the most popular kites for kids. Our family used to refer to them as bat-wing kites because their silhouette in flight was like that of a bat. The string is generally attached to the center of the triangle, along a central support which allows the long side of the triangle to flap and ruffle on the wind.

Much like a laundry line has multiple garments of clothing on them, a line laundry in the kite world is when the flier attaches additional items to the kite line. They generally rely upon the kite for lift and the additional items, like windsocks, spinners and streamers, are just for show and fun.

Sport or stunt kites are relative newcomers to the flying world but these kites are fun because you can do so much with them. They have actually been around for centuries but they truly became popular in the 1980s, when the delta shaped stunt kites were being offered by a variety of manufacturers and the so-called big wing (8 feet) stunt kites were first introduced.

They are generally defined as kites that are flown with multiple strings where the flyer can send the kite into controlled turns, dives, spins and twirls.

Power kites are designed to convert wind into pulling power. They are often used to pull boards over land, water or snow. They should never been seen as a toy and should only by flown by experienced fliers. These are not kites for kids as they could lift a child completely off of their feet.

Kites for Kids – The Easy Flyer by Premier Kites & Designs

For younger fliers, there are plenty of options for having outdoor fun with kites. The Easy Flyer Kites are among the most popular and are great kites for kids and those new to flying kites. They come in a wide range of bright colors and fun designs.

Among the other options are butterflies, dragons, parrots, pandas, dogs, cats and even a cool black shark – a fun and sassy attention getter at the beach.

Into The Wind Kites

Into the Wind has been proving that kites are fun for over 25 years. They sell kites at their Colorado store and on Amazon. They offer a variety of single line, delta, stunt and dual line kites. They make a good choice for fliers transitioning from recreational to competitive flying or looking for a bit more control over their kite when flying.

When we wrote this article, they had over 100 different kites available on Amazon. You can find the entire line here – Into the Wind Kites.

Speed foil kites are part parachute and part kite. Some of them do not have struts and rely upon the wind to keep their shape, which means the kite holds up well to crashing. They fly well in light winds but be prepared for a real arm workout or to possibly leave your feet if wind speeds are much over 10 mph. These are definitely not kites for kids. 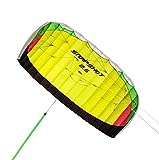 376 Reviews
Prism Snapshot Dual-line Parafoil Kite
The highest recommended one on Amazon seems to be by Prism Kite Technology - a company long-known for quality stunt kites. The Prism Snapshot can fly in as little as 4mph wind but should not be flown in winds in excess of 25 mph. It could be described as a blend of a stunt kite and a power kite. Several Amazon reviewers listed it as an intermediate kite but also good for stunt and power kite beginners. Most importantly, this kite is a lot of fun to fly.
Buy on Amazon

Trampolines are a fun activity for people of all ages to enjoy. It is a… 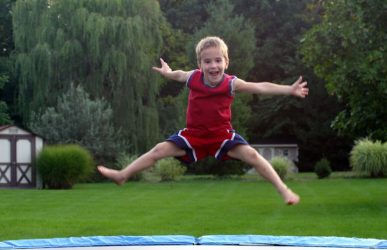 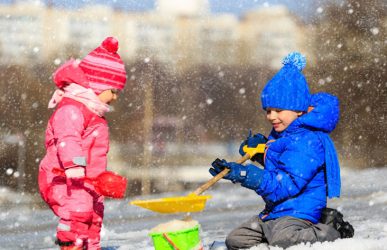