Gym class. Two words that bring back memories most of us probably wish we could forget. Gym class was the stuff of horrid uniforms, militant gym teachers and trying to play volleyball with 20-30 kids on each side of the net. It wasn’t very often that we actually had fun or did anything that would truly lead to being fit. But, every once and a while, the teacher would pull out an old, retired parachute. We had fun those days, even if we were wearing ugly little jumpers.

Today’s children and their families no longer have to track down a discarded parachute; there is a huge variety of colorful play parachutes available on Amazon. They come in a wide range of sizes for families to play with. Whether inside or out, children (and the young at heart) can have hours of fun at home.

The toy parachutes of today come with handles and range in size from a rectangular model that’s only 3 X 5 feet to large back-yard models that can be as big as 20 or 30 feet in diameter. Many of the smaller ones can be found for around $15-30 and the larger ones generally start around $100 but can sometimes be found for less. Just don’t forget to consider the size of your intended play space and the number of potential players before buying a play parachute. 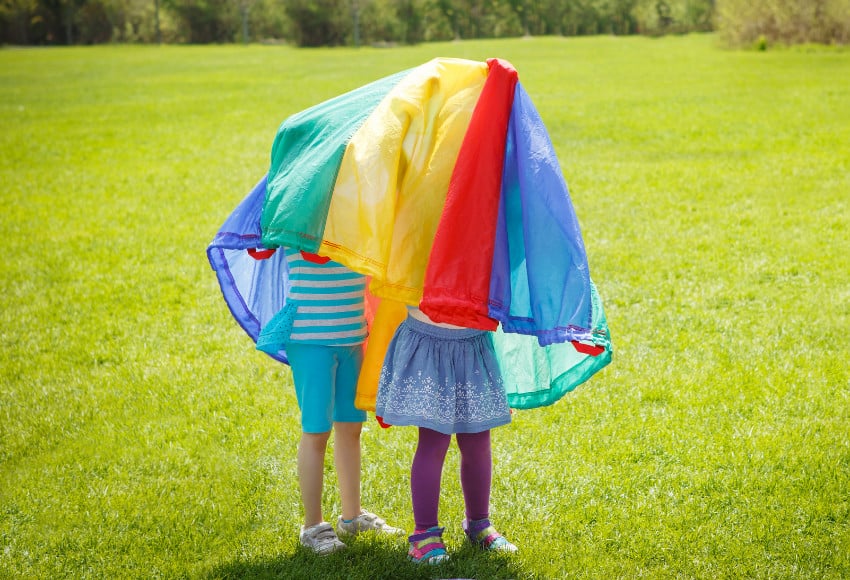 There are a number of more traditional games that folks can play with parachutes. And, it won’t be long before your children and the rest of the family start coming up with their own. The ideas are virtually endless. A preschool teacher was surprised what her kids came up with, including using it as a giant picnic cloth.

There are so many variations on parachute ball toss games. Players can toss the ball into the air and catch it again. They can play in groups with multiple parachutes and play catch – tossing the ball from one chute to another. They can try to wave and tilt the chute to get the ball to fall through the central hole. Play keep away from a particular color on the chute.

The key to a successful ball toss parachute game is the ball itself. We recommend a ball similar in size to a softball. Please don’t use a softball though; they are, well, hard and could hurt someone or damage the ceiling when playing indoors. Those plastic ball-pit type balls can be used but they are generally a bit too light – they fly nice but can hurt and there’s less control over where they go. Smaller rubber playground balls or “knobby balls” are good choices. Do keep in mind, most medium-sized play balls are sold un-inflated and you might need to purchase an air pump to fill them or find ones that come with their own pump.

Parachute ball toss works with all sizes of parachutes and can provide hours of fun.

You’ll need a larger play parachute but playing tag with one can be a lot of fun; it also provides more exercise for the players. The idea is that everyone lifts the parachute high enough and fast enough to trap a bunch of air. As the chute starts to deflate, one or two of the players runs to the other side before the chute touches them or deflates completely. The other version of this game is that the other players try to pull down the chute fast enough to trap the player underneath to get them “out.”

Part of what made that old parachute so much fun in school was that we could all play. Many families would be hard pressed to assemble 20 or 30 people to play but there are toy parachutes designed for as few as two people. The smaller ones may also be better for indoor play as well.

There are a number of vendors offering what I would call medium-sized play parachutes. These are the more traditional round shape and vary in size from 6 to 12 feet and have 6-10 handles. Medium sized parachutes would be good for families with 3-10 players.

Prices seem fairly consistent among the smaller-sized chutes. That changes with the larger models. In some ways that makes sense, the bigger the toy, the more fabric and the stronger that fabric will need to be.

The larger play parachutes may offer a secondary play option. They make super cool and colorful forts when draped over swingsets and outdoor play structures.

Just a few last thoughts on ensuring you have hours of fun, safe play.

While at least one family has turned their large play parachute into a cover for their above-ground pool, these are not suitable pool toys. They will become extremely heavy when wet and may trap someone under water. (This point may seem silly but there was at least one person who posted a question about using a 20 foot model in a pool.)

Be careful when family members are different heights and weights; particularly with larger chutes. The force from the trapped air could actually lift smaller members of the family off the ground.

Please resist the temptation of using these to toss people. These are toys. They were not constructed to hold a person, even a small one. It’s not just their weight that comes into play but also the weight of the fabric as well as the strain of the airflow.

And, finally, it sadly must be said – these are toys. Do not allow children to play superhero and jump off high places with their “parachute.”

Trampolines are a fun activity for people of all ages to enjoy. It is a… 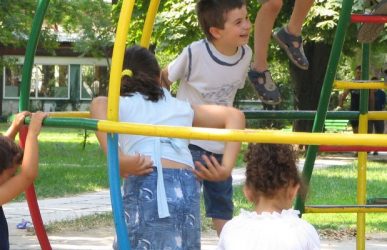 Do your kids love to climb on the furniture? Or maybe they love the jungle…