They just don’t make sleds today like the antique wooden runner Flexible Flyer sled my family has used for generations. Wipe a year’s worth of dust off and put a little wax on the rails and it was good to go for another season of sliding. Most of today’s sleds just aren’t made like that anymore. The folks at Hammerhead Sleds have taken that old adage to heart and embraced it to create a modern sled that rockets down the slopes and offers something extra – comfort.

The designers wanted to take what people loved about those old Flexible Flyer sleds and use modern materials and manufacturing methods to create a sled that is both comfortable and blazing fast. Mesh seats, a 6063 aluminum frame, a responsive steering system and skis that can be changed to match conditions are what makes Hammerhead sleds one of the hottest sleds on the slope. Hammerhead has been awarded the IDEA silver award from the Industrial Designers Society of America and Business Week. In 2009, it was named Outside magazine’s Gear of the Year “covet” item.

The reviews we found would indicate that this is finally a sled for adults who have grown up bodies but haven’t grown out of playing in the snow. We’ve seen very few complaints amongst the reviews we found. One owner reported a problem on a Sunday and by Wednesday they were with their Hammerhead sled on the slopes. If you like a slow, sedate ride through the snow, these sleds are definitely not for you – they are speed demons. Several owners and the company suggest wearing protective gear.

Speed demons, who might find the low profile and unique seating of the lower-priced Zipfy sleds something that should been left to youngsters, will fall in love with their Hammerhead Sled. Like the Zipfy, families often purchase multiple Hammerhead sleds and proclaim they are the envy of the sledding hill. But, unlike the Zipfy, Hammerhead sleds provide a true luge-like sledding experience where riders can ride on their stomachs or in a more traditional seated position.

These sleds aren’t for the faint of heart. They ride super fast, provide an almost hammock like seat and will make you the envy of the hill. Speeds of over 40 mph are not unheard of. Hammerhead Sleds use four separate runners. The two in the front are attached to the stainless steel leaf spring steering mechanism.

Outside magazine rated the Hammerhead Pro XLD the second best sled of 2010. They admit to placing a perhaps unfair bias against the sled due to its higher price. The reviewers admitted that the Hammerhead Pro XLD was their favorite among the 15 sleds they tested, that it smoked everything else on the hill and was exceptional for steering around trees, small children and other sliders. It’s doubtful that the apparently discontinued $15 plastic toboggan they compared it to, which relied on the passenger’s ability to shift their weight to steer, could ever match the Hammerhead Pro XLD being ridden in this YouTube video down an alpine canyon in Utah.

This is one case where spending more will get you a better product. So, if you want to upgrade from the traditional, un-steerable and often slow sleds that you’ve been using, to what one reviewer called the Aston Martin of sleds, try a Hammerhead Sled this winter season.

When we first wrote this article, there were several Hammerhead Sled models available. It appears that the Hammerhead Sport VLD and Hammerhead Pro X are no longer available. The appears to be their latest model and it comes ready for full mountain, adult performance. The Pro comes equipped with HDPE rear skis, rubber ski boots and a carry strap.

The Hammerhead Sled can travel at high speeds. You might want to consider investing in snow goggles or a helmet to ensure hours of safe play. Amazon.com carries many of the top brands including Spy, Bern, Oakley, Electric and others. OutdoorToys.us has found that Amazon is offering $20 off a $100 purchase of select snow goggles and/or helmets from a number of top brands. (Amazon did not indicate how long this promotion will be available.) 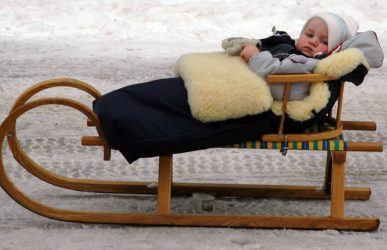 Types of Sleds - Wooden or Plastic; Flat-Bottomed or Runners When it comes to answering…